Difference between revisions of "Intoxigator" 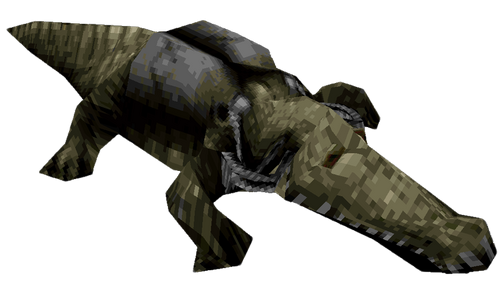 The Intoxigator is the first boss of Episode 1 The Foothills. As the name implies, he is a American Alligator that has had Moonshine Bottles fused onto him, allowing him to spew out toxic vomit. He is very slow, and attacks with acid spit, which can be easily strafed to the side, or blocked by some of the columns or other stuff found in the arena. He possesses 5000HP, which isn't much, but at the time, player's strongest weapon in his arsenal is a Assault rifle (excluding secrets pick ups), which makes the fight last much longer, than it would be later in the game. After killed, jakob remarks "My Pet! You will pay!"