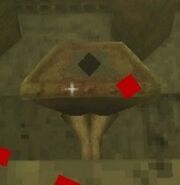 Turrets are defensive mechanical structures that target the player and attempt to kill them.

They fire the same projectiles as possessed soldiers, but with much higher speed, spread, and in much faster bursts. Turrets can be heard when they sight the player by a beeping noise, and with low-spec mode turned off can be seen with a green light from a distance. Typically, Turrets are fairly inaccurate over long ranges (such as those found outside in E2M3), but will continually fire in bursts at the player. Turrets have low health, some of the lowest in the game, and can be easily dispatched with any weapon. Currently only seen in the episode The Facilities, they are first encountered in E2M3 and found continually in military or industrial areas throughout the episode.

Despite being a seemingly automated, computer controlled defense weapon, Turrets will still in-fight with any friendlies that happen to hit it with an attack, including other Turrets.