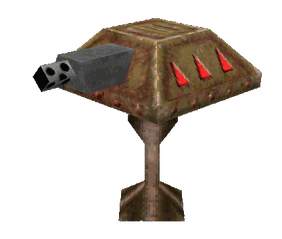 When spotting a player, Turrets will beep and begin to turn towards them. While low-spec mode is off, Turrets can be seen with a green light from a distance. Turrets act as more of an environmental hazard than an enemy, as they are rooted in place. Typically, Turrets are fairly inaccurate over long ranges (such as those found outside in E2M3), but will continually fire high-velocity bursts at the player. Due to the Turret's low health, continuous fire from the Assault Rifle or Shotguns can be enough to take one down. At long ranges, using the Hunting Rifle to eliminate Turrets is ideal, as one shot will destroy it. 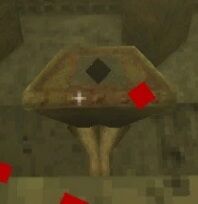